The USS Radford Association has hosted annual reunions for nearly every year since its founding in 1991. The only year missed was 2020, because of the pandemic. The 2022 Reunion was held in Grand Rapids, Michigan and hosted by Ralph “Skip” and Carol Young. Look here in the post-reunion newsletter for details and pictures.

The USS Radford Association’s Coordinating Council oversees the operations of the association, manages its account, supports the annual reunions, publishes the newsletter and maintains the roster and website.

The USS Radford Association has been guided over its 30 years by two presidents, Vane Scott from 1992-2014 and Chuck Parsons from 2014 to 2022. The association’s members owe a deep vote of thanks to these two shipmates for their tireless dedication to celebration of the Radford and its crew over three decades.

The roster of Radford shipmates is maintained by Kimberly Parsons. Please contact Kim at ussradford@gmail.com with updates and changes.

When the USS Radford Association began in 1991 we had no idea of having our own museum. Almost no destroyers do, except the ones that actually still have a ship. The idea began to develop in the spring of 1995 when I put a notice in the April/May/June newsletter, stating, USS Radford Museum & Archives – How does that sound? I began to realize, after much research, that most of Radford’s history was so capsulated that even the Presidential Unit Citations were not listed. As President, I decided we needed an Archive that paid attention to the ship’s history and along with that came the necessity of a museum.

After reading our namesake’s bio, Admiral William Radford, I decided the most logical location was the small city of Radford in Virginia, near where he grew up and which was named for his family. Unfortunately, there was not enough space available so, in 1999, we had to do something else. A prime piece of corner property came up for auction, right downtown, in my hometown of Newcomerstown, Ohio. A former car dealership, it had 5,446 square feet under roof and a large corner parking lot.

I contacted my Vice President, Jack Guiliano in Colorado and he advised that we should buy it for our Museum and Archives. Ended up, he financed the purchase and the following year donated the entire property to us free and clear. Through volunteer help from a friend and several Radford sailors that traveled here, we prepared the building and then customized it for the museum. Meanwhile, we had been accumulating artifacts and papers for the museum and archives. My wife Barbara & I had a spare bedroom chock full of Radford stuff. Finally, on September 28, 2001 we dedicated the museum during the 10th National Radford Reunion which was being held in nearby Canton, Ohio. We had four bus loads of former Radford shipmates and their mates.

Since that time we have had visitors from all over America and some foreign countries. The visitors from the Congressional Library in Washington stated, “This is the finest Naval Museum we have ever visited. You don’t have to take a back seat to the Smithsonian for quality.” Since then we are constantly adding more displays, including the entire 27 years of Daily Logs. And, we are adding the ships from Cactus Squadron 21, the most decorated destroyer squadron in naval history. We already have major displays for the USS Jenkins DD/DDE447, USS Nicholas DD/DDE 449, and the USS O’Bannon DD/DDE 450. And, we have major displays for cruiser USS Helena CL450 and the New Zealand cruiser HMSNZ Leander, the two ships that Radford helped rescue during the Battles in the Solomon Islands.

At the 2010 reunion in Branson, Missouri, the USS Radford Board of Directors met to discuss the future of the Radford National Naval Museum. They agreed on the importance of securing the opportunity for future generations to experience the history of this highly decorated destroyer and the men who served aboard her. To this end, they unanimously agreed to relocate the Radford Museum to the USS Orleck DD 886 and in June, 2011, the Museum contents were brought to their new home in Lake Charles, Louisiana.

The Orleck Museum also had difficulty funding its continued operation.  Through a series of events, in 2019-2020 the team developing the Jacksonville Naval Museum reached agreement with the managers of the USS Orleck Museum to move the Orleck to Jacksonville, Florida to anchor its newly developed attraction in downtown Jacksonville.

After a series of mishaps, including surviving Hurricane Laura, the Orleck, DD 886, was refurbished and painted in Port Arthur, Texas, was towed to Jacksonville, arriving in March, 2022.

The USS Radford Association voted at its 2022 Reunion to donate $10,000 to the Jacksonville Naval Museum to help with the outfitting of the museum and the reservation of the artifacts from the original Radford Museum.  Larry Davis, Radforad Association Board member presented the check on July 19, 2022. 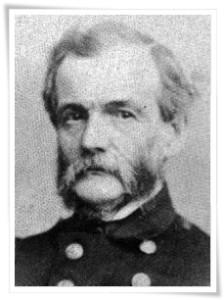 The Navy Destroyer Radford was commissioned in 1942 and named for Rear Admiral William Radford, who was born March 1, 1808 in Fincastle, Virginia and joined the United States Navy during 1825. He commanded the landing party from the Warren, a second-class sloop-of-war, which captured the Mexican warship Malek Adhel at Mazatlan and took part in other Pacific coast operations of the Mexican War. He was commander of the Cumberland during the Civil War, but was on board the Roanoke as a member of a Court of enquiry when the Cumberland was attacked and sunk by the CSS Virginia. Captain Radford went on to command the armored ship New Ironsides during Union attacks on Fort Fisher in December 1864 and in January 1865. He was promoted to Rear Admiral in 1866 and commanded the European squadron during 1869 and 1870. Rear Admiral Radford died in Washington D.C. on January 8,1890.