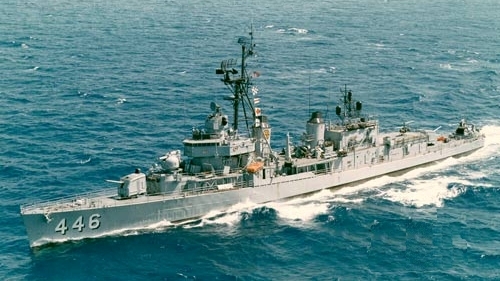 The USS Radford, DD/DDE 446, was one of 175 Fletcher Class destroyers commissioned in World War II. The Radford operated with a crew of about 300 men who maintained the ship and manned her weapons of war in WWII, Korea, and Vietnam. She was awarded the Presidential Unit Citation for valor and 26 battle stars for war time actions. She earned numerous other decorations and awards during her many years of service. The Radford crew rescued 468 sailors from the sea when the cruiser USS Helena was sunk in the WWII Battle of Kula Gulf. The Radford Museum sculpture “Deliverance” commemorates this heroism.

The ship was decommissioned in 1969 and later sold for scrap, but, she lives on in our history, at the Radford Museum on board the USS Orleck DD 886 located in Lake Charles, Louisiana, and within the memories of the surviving men who served aboard during her long and distinguished service to the US Navy, and the people of the United States of America.

The USS Radford Association was founded in 1991 by Vane S. Scott who served as President, Writer, and Editor of the Radford Newsletter until October, 2008.

At the Annual Business Meeting held on October 4, 2008, the  Association elected Charles A. “Chuck” Parsons as its new President, Writer, and Editor of the Radford Newsletter.

The Association has located over 1,400 former shipmates, and we want to know if you, or someone you know, served on this legendary destroyer. Contact our President to find out how you can help Radford live on.